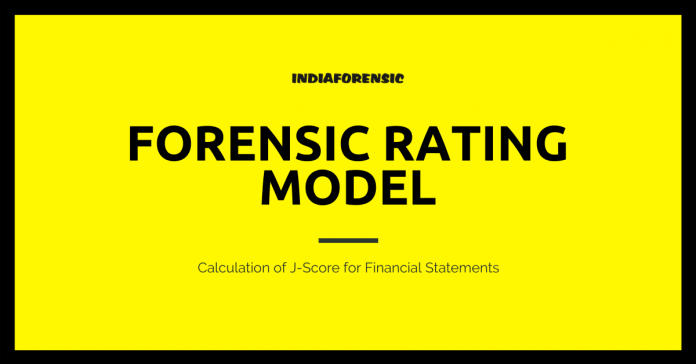 Financial Statement Frauds are becoming rampant in India. Satyam accounting scandal exposed the extent to which the management can go to manipulate the numbers in financial statements. Satyam scandal also revealed the methods used in manipulations of financial statements. The Forensic Rating Model is built on the J-Score obtained after analyzing the early warning signals of corporate frauds.

We term the financial forensic model as J-Score, which is a mathematical model that uses multiple financial ratios to ascertain the financial irregularities. These ratios are weighted by coefficients to identify the nature of irregularities. It is authored by CA Mayur Joshi in the year 2011. J-score which is named after Mayur Joshi, surmises that companies are incentivised to manipulate financial statements when they have high sales growth, deteriorating gross margins, rising operating expenses and rising leverage. However, the J-score is built on the presumption that it is difficult to manipulate the cash flows.

In 2008, Indiaforensic started a research in association with one of the accounting bodies to identify the early warning signals of corporate frauds. This study resulted into a finding that more than 1200 companies in India could be indulging into creative accounting practices. In the year 2020, when we reviewed these companies many of them which were classified as high risk have been out of business and most of them are trading below Rs.10. The J-Score model is helpful in identification of potential red flags in the financial statements.

After the Satyam Scandal broke, this research gained significant attention, as it was one of the first few studies which predicted such massive scale creative accounting practices.

The findings of this study were used to create a probability score, which was termed as the J-Score in the year 2011. This study highlighted the importance of the Cash flows and the primary foundation of the J-Score is cash flow comparison with other financial statement parameters.

It was based on the extensive financial research of more than 800 thousand Indian companies, and millions of individuals who represent these companies.

According to this research any business is associated with at-least thirty types of different risks in India and the rating model assesses every company on these thirty parameters. We have built our own database of High Risk Customers who fall into one of these 30 categories. This helps us to provide the rating to the companies based on their risk scores.

Output of these two scores defines the company as High Risk, Medium Risk or Low risk.