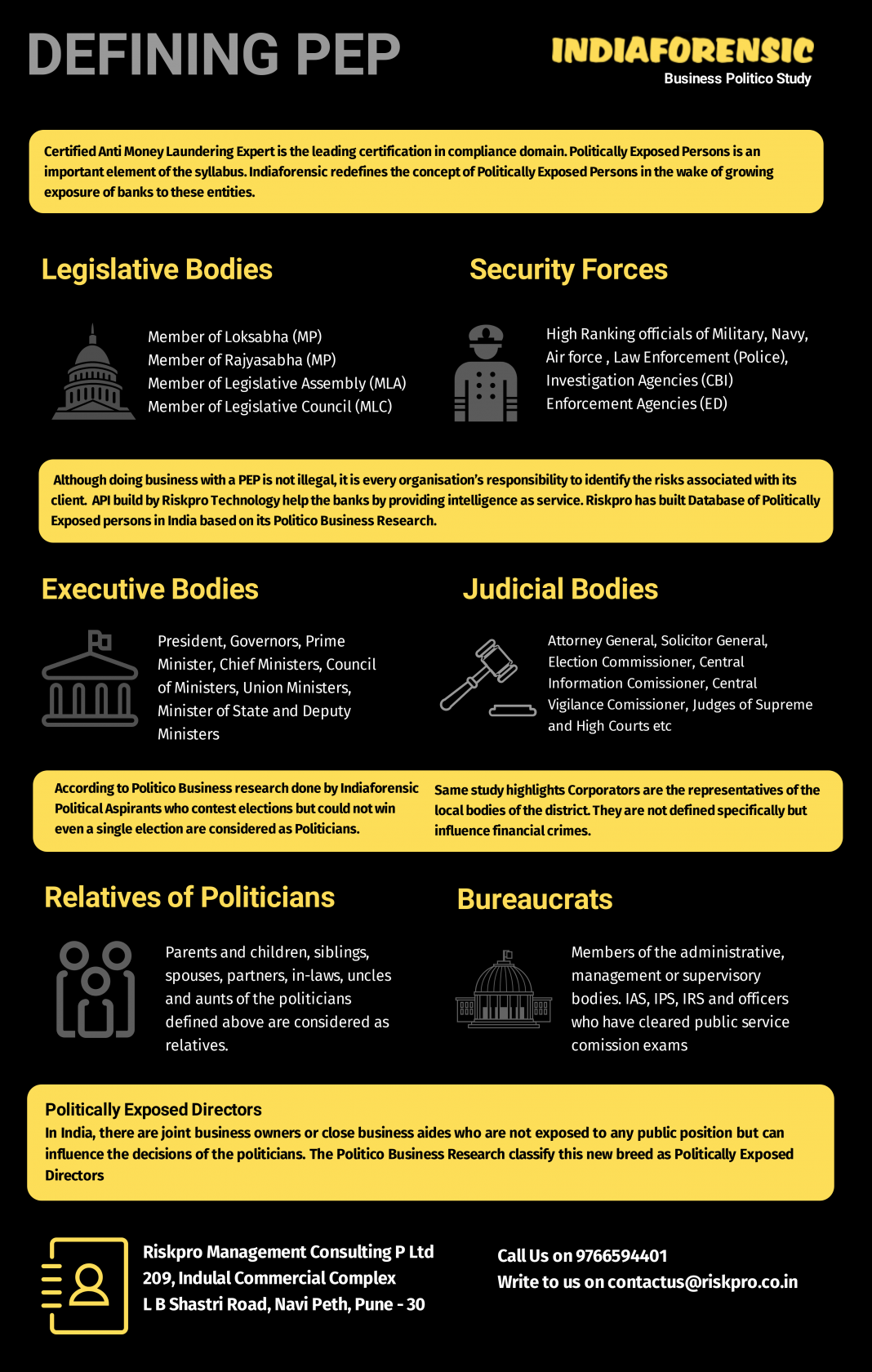 In order to ensure an organization’s accurate compliance with the latest financial regulations related to Politically Exposed Persons (PEPs), it is imperative for the financial institutions and banks to fathom the complex structure and meaning of a PEP.

There is no concrete universal definition of who can be classified as a PEP, as the criteria varies across countries. Also, the Financial Action Task Force (FATF) frequently issues updated recommendations regarding the scope of PEPs.

In simple words, a Politically Exposed Person may be broadly classified as someone in a prominent public function who can exercise influence and is more susceptible to corruption.

Additionally, any family member or close associate of such a person is also deemed to be a possible risk and hence is also considered a PEP.

Three broad categories of a PEP would include the following classification:

It is important to note that each country may have different local regulations defining the PEP Status, which need to be understood and followed while conducting business with that jurisdiction.

According to SEBI rules, financial intermediaries (such as banks and funds) are also required to get senior management approval before entering into financial relationships with PEPs. A circular was rolled out stating that every bank must verify identity of such individual and seek for a closure of each and every details about the person before enrolling him as a PEP.

RBI rules require banks to do additional due diligence about the identity of PEPs. A drastic change in the transaction amount or pattern of PEPs could invite further investigation by regulatory authorities. Your KYC process will also take longer than the KYC process for ordinary individuals and additional documents may be required from you.

Legal Entities such as companies or trusts are not treated as Politically Exposed but they are considered as high risk. Though they could potentially be fronts for terror financing, be facilitating narcotics smuggling or other criminal proceeds, etc., proper due diligence on beneficial ownership is required, based on the risk-based approach and internal policies.

PEPs are considered to be higher risk customers for financial institutions. Owning to their position of prominence, they are more likely to be presented with opportunities for acquiring assets, through unlawful means or being involved in embezzlement, corruption or other financial crimes associated with money laundering.

Different Politically Exposed Persons pose different levels of risk. The level of risk differs depending on many factors including but not limited to geographic location, industry or sector, position, and level of influence or authority of the PEP.

Once an individual is identified as a PEP, financial institutions should ideally strengthen their Anti-money laundering and Counter Terrorist Financing measures against these individuals. Also, an enhanced due diligence must be performed to safeguard institutional interests.

It is important to note that banks or financial institutions are not prohibited from having the business relationship with the politicians because being politician itself is not the indication of criminality. However, Senior executives of the banks should be updated with the information related to the relationship of politically exposed persons with the bank. Heads of State, Foreign Government officials or any other senior foreign political figure should be communicated to the top executives of the bank.

Risk Based Anti Money Laundering Approach focuses on the identification of PEP, Commercial PEP Lists such as Riskpro in India, are good starting points, but internal databases and shared accounts can also be used to logically expose a PEP’s network.

Banks and other financial institutions that are subject to Anti-Money Laundering regulations should undertake PEP screening during the client on-boarding process as a part of the bank’s Know Your Customer (KYC) program.

In India, Riskpro offers the PEP matching solutions which help the banks and financial institutions to ascertain the PEP status of their borrowers or customers based on the matching of Unique Identifiers in addition to simple name matching. There are more than 100,000 curated records of the politicians, their relatives, close aides, high risk companies (exposed to the politicians directly or indirectly) and bureaucrats or government officials.

This is the only India specific solution available for the Indian banks to identify the PEPs. The API for this service is also available from the company.

Regtechtimes, which is one of the leading regtech media has built the certification course on the subject of politically exposed persons and is available for the compliance professionals in the video learning mode.